skip to main | skip to sidebar

Rule of thumb for modern living: 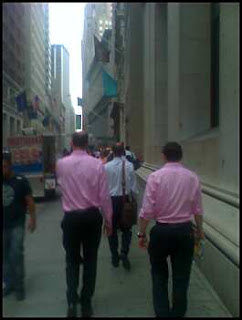 I came across those two gentlemen on the j train this morning at Bowery. Fortunately they got off at Broad St. because I was prepared to follow them anywhere in order to take that picture.


Vegas this weekend, YFBFB has returned.
Posted by GG at 9:26 AM No comments:

The twilight of Bob Dylan’s career would be better served if he was less like a rolling stone and more like a Rolling Stone. As Martin Scorsese’s recent Shine a Light documentary proved (and from what I’ve heard all of their concerts still prove) the Stones have been around for a long, long year but haven’t really lost a step. The same cannot be said for Mr. Dylan.

Last night’s show at Prospect Park was an extremely hot ticket in New York. Released in early July, YFBFB and YFBFBGF were online for a combined three hours attempting to get tickets with no luck. Fortunately YFBFBGF spent some time refreshing Craigslist yesterday until the right post showed and she pounced.

$55 a head and 5 hours later we were standing on the beer line at PP Theater waiting for a chance to pay $6 for a Budweiser. The theater is like a natural forming amphitheater with the venue gradually rising as you move further from the stage. We were quite far from the stage and couldn’t see very clearly but the rain had stopped an hour or two earlier and our spirits could not be dampened.

Dylan came out with Rainy Day Woman #12 & 35 which was neat but turned disappointing. His backing band sounded folksy and the crowd droned out much of Dylan’s singing (either that or he actually was only singing about one in every four words which is also a possibility).

After RDW #12 & 35 I headed to the port-a-potty to heed Dylan’s demands. Cops were out in force but there really wasn’t much tension in the crowd which ran the spectrum age wise but was almost entirely white.

He second song was lay, lady lay, reworked to sound like an Eagles reunion tour song. And therein lies the heart of the problem. If Dylan is going to rework his classics with the same lyrics but different music he has to actually sing the lyrics. Otherwise the effect is plain confusing.

There were a couple highlights, Masters of War was very good and Dylan seemed enthused by the song, also whenever he broke out the harmonica it seemed particularly special. All in all it was an experience to get to see Bob Dylan perform, but had a complete unknown 67 year old man played the same exact music, $55 could have purchased a lot more $6 beers.